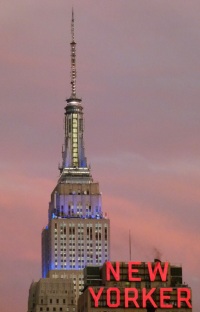 2013 has been another year of international marathon achievements by Clapham Runners, including in London, Nepal, Rome, Hamburg, Norway, Amsterdam et al.  Two teams of five also ran in a Thames marathon River Relay.On 3rd Nov it was my turn to have a crack at one in New York, which I was fortunate enough to get an invite to via work in ING’s 11th and last year as main sponsor.

Before taking the train down to NYC, Annie and I spent a couple of days getting to know Boston. This also saw the start of my carb-loading (not too tricky in the US!..) and coincided with the Red Sox winning baseball’s “World” Series on home turf. The whole city was abuzz with this – even dressing a large statue in support of their bearded team!

We were staying just around the corner from the permanent yellow Boston marathon finishing line, which was poignant to see after April’s atrocity. “Boston Strong” logos were very much in evidence reflecting the city’s defiance, solidarity and caring.  Blue ribbons and other tributes honouring the Boston victims were also worn by many of the NYC marathoners.

We also came across the Tortoise and Hare sculpture which pays permanent tribute to Boston Marathon runners of all ilks and which obviously now carries more weight.

My expectations for the NYC race fluctuated during my 3 month training build up with a couple of annoying injury disruptions.  I somehow managed to average close to my training target of 50km/week, albeit without as many long runs as I’d planned.  I therefore still had some hope of getting close to my goal of 3½ hrs (ie 5 mins/km).

With just over 50,000 participants and heightened post-Boston security the logistics were immense.  After a 6.15 a.m. rendez-vous I joined other ING runners in a large police escorted fleet of coaches for the 1.5hr trip to the Staten Island start.  A pretty awesome spectacle it was too; the mass of runners assembled on the edge of the giant Verrazano-Narrows double-decked suspension bridge with the likes of “The Star-Spangled Banner” and Frank Sinatra’s “New York, New York” blaring out to add to the air of anticipation just before the off.

It was a chilly morning with a brisk northerly wind, so after the early start I was relieved to be in the first of the four waves of starters.  We set off at 9.40 on both decks of the bridge and the views across to the Manhattan skyline did not disappoint.  This was the steepest section of the course with mile 1 being all uphill to the top of the bridge!  However, with fresh legs and the excitement of the occasion the incline wasn’t overly noticeable, enticing most of us probably to go off a little too fast…

The course takes in all five NYC boroughs, and the second was a long stretch north through the cosmopolitan neighbourhoods of Brooklyn where the crowds were out in force. This time I ran with my name on my shirt and it was great to be spurred on with frequent shouts of “Stevoooo” or “Let’s go Stevo” and even “Stevo, let’s go baby!”My loyal support crew joined the ING cheering point at c.13 miles just over the bridge into Queens – I still can’t believe she managed to get good shots of both the eventual winners but missed spotting me!…

Next on through Queens and then…. another big bridge – the iconic Queensboro Bridge.  This was the start of the business end of the race – at c.25km it was a long punishing climb, evidenced by my slowest km split (6:15!).  I really had to dig in to maintain some rythm up this imposing spectator-less metal brute.  The end of the incline was a big relief and as we approached the bridge exit the first sight of and roar from the Manhattan crowd provided a real boost.

Their enthusiastic and colourful support continued as we headed north from 17 to 20 miles straight up First Avenue.  This stretch was quite surreal with the skyscrapers, cheering crowds, colourful bands, NYPD officers, etc giving me a fleeting vision of being on a film set!  Keeping up a decent pace was now becoming increasingly challenging and repeating this year’s mantra of “relax the shoulders, maintain your form” didn’t seem to prevent increasing numbers overtaking me…

Then over another bridge into the Bronx where we turned west at the north end of the course before crossing back over the Harlem River into Manhattan and a left turn into Fifth Avenue.  This was the long home straight towards Central Park which couldn’t appear soon enough!  With my pace having dropped to over 5 min/km I was now in survival mode and pushing hard to stop it slowing further.  We entered Central Park half way down before looping around the southern end – most of which is a bit of a blur – to the relief of the finish line.

I crossed the line in 3:31:58 feeling wobbly and in dire need of sustenance – which took an age to come by along the walk of at least another mile while being processed!…  Annie’s quest to see me had again been thwarted – with (understandably) overzealous security denying her et al access to their booked seats in the finish line grandstand.

This was 3 mins outside my PB of a year ago in Dublin and just outside my target.  Nevertheless, overall I felt pretty pleased given my build up, those bridges, headwinds, etc.  Having said that, I came away, like many marathoners I suspect, thinking that I still have potential to do a little bit better….  So whilst in those last few miles I was convincing myself that this was the last time I’d ever be putting myself through such madness, after a while I do admit that thoughts of having a stab at another one have been creeping in…. 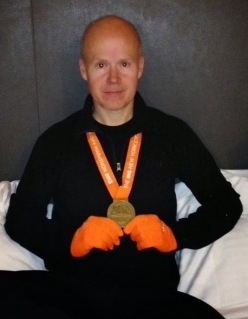 The theme of missing each other continued as Annie and I both waited in the cold at different meet and greet points for seemingly an eternity!  Those sexy ING orange gloves came in handy though… and hence the finisher pic having to wait until we were eventually reunited back at our hotel!

“Marathon Monday” was a beautiful crisp clear day for wandering in Central Park to reflect on the experience and for the obligatory medal engraving and shopping.
Overall a fab event that I was privileged to get to experience and would thoroughly recommend – tricky to get places though, unless I guess you work for the new title sponsor Tata Consultancy Services…

New York, New York, so good they named it twice!