Just enjoying my tapering in the lead up to the Comrades marathon on 2nd June!! Can’t believe there are only 2 weeks to go! Here is a blurb about the race (courtesy of Wikipedia):

The Comrades Marathon is an ultramarathon of approximately 89 km (approx. 56 miles) which is run annually in the Kwazulu-Natal Province of South Africa between the cities of Durban and Pietermaritzburg. It is the world’s largest and oldest ultramarathon race. The direction of the race alternates each year between the “up” run (87 km) starting from Durban and the “down” run (89 km) starting from Pietermaritzburg.During the event an athlete must also reach five cut-off points in specified times to complete the race.

Pietermaritzburg is my home town and I used to watch the runners run past my house as a little girl thinking that I would run it oneday! I told myself I had to run it before I turned 30 and, cutting it a bit fine, I’ll be on the start line 9 days before my 30th birthday!!

I’ve done a few races to train for it, including: London Ultra (along the Capital King Route), Silverstone half, Tunbridge Wells half, Rome marathon, Hamburg marathon and the Malvern Hills 40 miler. Coincentally I managed to win the Malvern Hills race as majority of the field elected to do the 52 miler, leaving me with 2 cohorts who ended up pulling out! Gold medal Steven Bradbury style!! (If you don’t know who that is, I suggest you watch this youtube clip for one of Australia’s most momentous winter olympic medals:
http://www.youtube.com/watch?v=4Z6GnUTVAF0 ).

Here are some pics from my training runs (I’m still trying to get over the fact that a marathon is classed as training): 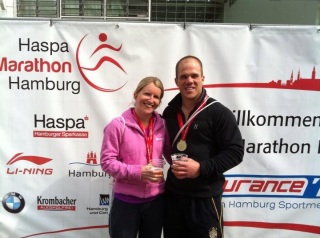 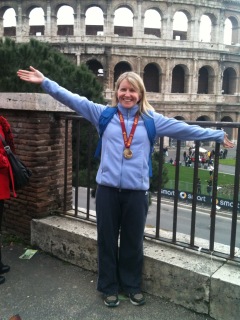 Well done to all the London Marathon runners – give us a blog!! Looking forward to reading about Rob’s Everest adventures soon too! Watch this space!